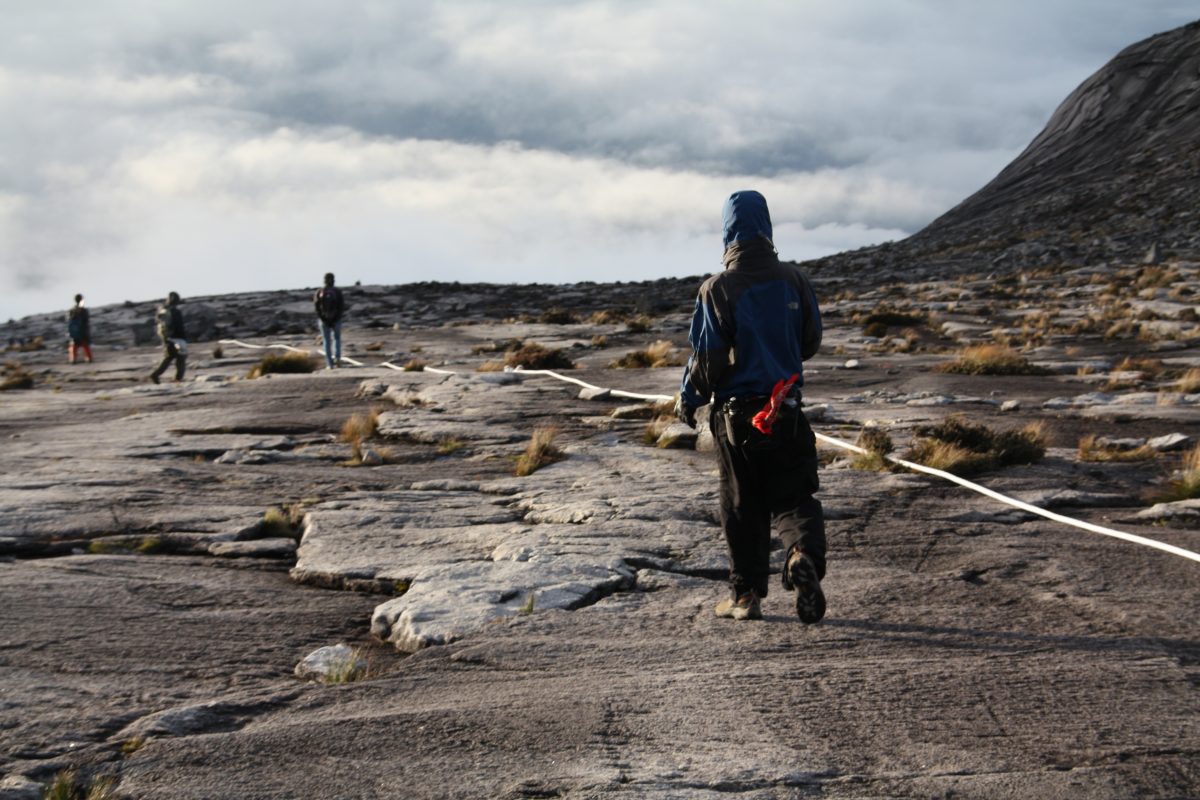 It was the first mountain I climbed – Mt Kinabalu in Borneo.

“What on earth made you want to get into that kind of thing?”

You’d think I’d confessed to being involved in some illicit deal or less than socially acceptable pastime.  But the question was posed to me at an event recently where I was asked what I enjoyed doing in my spare time.  When I answered with mountain climbing, trekking and rock climbing, that was the response.

It’s not an unusual response, the words might differ as might the context, but they have a common thread.

Why would you put yourself through something like that?”

What, you carry your own bag?

I don’t understand you.

Where do you shower?

This gave me cause to think back to where it started.  Where I went from a pack a day smoker to wanting to climb a mountain.  To being drawn to do this without any knowing why, without any prior experience hiking or climbing mountains.

I remember it well.  With the family I was spending a week in Borneo before a week in Singapore.  When the trip was planned, I stumbled across some information on a mountain in Borneo that you could trek to the top of and it only took two days.  I was really drawn to do this – and to this day I don’t have a concrete reason why – I just was.

My family weren’t really interested, preferring the 5 Star resort (and one can’t blame them – this was me the mountain was calling, not them).  In the end my son who was 13 at the time, agreed to keep me company.

We all have our mountains to climb, real or figuratively. 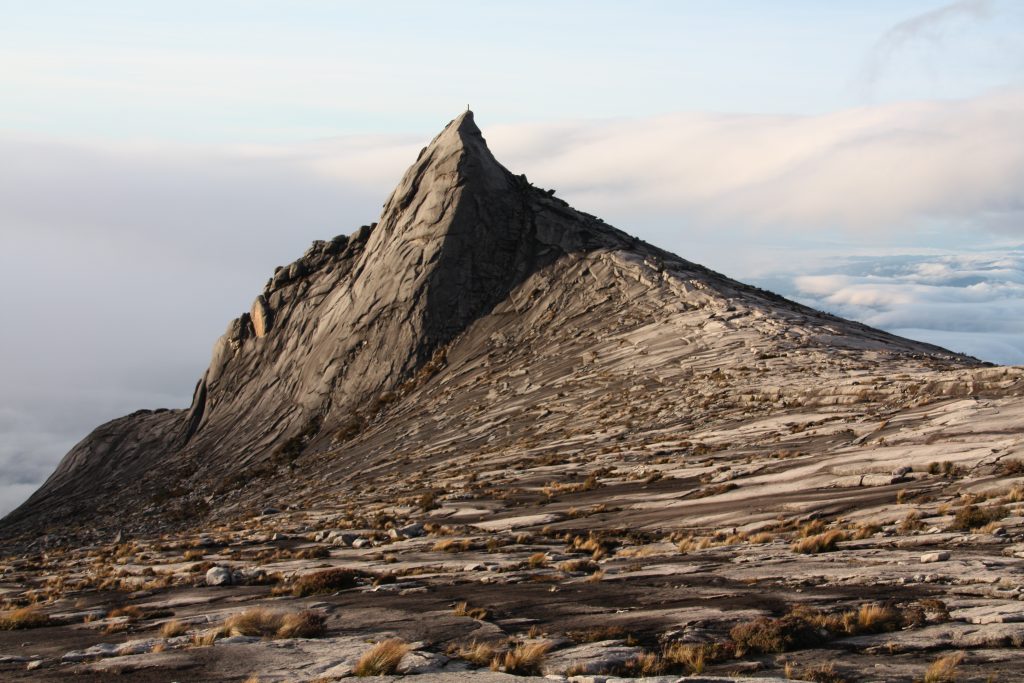 The time for thinking about climbing a mountain was over.  After a few days of resort living, eating well, laying by the pool and generally relaxing, my son and I were off!  We hired a guide and elected to carry our own packs.  It was hard work from the outset.  Monsoonal rain commenced about five minutes in and didn’t let up for six hours.  The steepness was extreme and my legs were screaming after only a short distance.  We had 6km to climb to get us to Raban Lata Resthouse which sits at about 11,000ft, (3350m) where we would sleep for a few hours before heading up to the summit.

We were soaked through despite our Gore-Tex jackets, and we were sweating profusely from the exertion.  Our packs seemed heavy.  The air became thin and we were cold.  There were times where it was all a mental game.  The pain in my legs was constant.  I was oxygen deprived and struggling with my breath.  Everything was slippery and it was still pouring down, and given the cloud cover, we could see nothing more than about 20 metres all around us.  The steepness seemed never ending.

It was a hard slog and a serious physical and mental challenge for me.  The final 500m to the Resthouse were on all fours it was so steep, and the air was very thin.  We were wet and cold, and tired of course, but with a renewed energy knowing we were almost at the Resthouse, and a hot shower as promised in the brochure!

There was a flat piece of land in front of the Resthouse and for the first time that day, the clouds briefly cleared and we could see something other than thick, white mist.  It was breathtaking.  We were so high the clouds were all below us.

The sun was setting on the horizon and for the briefest of moments, we got to see some lower mountains and the most beautiful colours of the sunset through the clouds.  Then it was gone.  We were at about 11,000 feet or 3350m.

We headed up the final rise to the Resthouse but there was no hot shower – there were signs around saying that the generator had broken and there was only enough power for lights and cooking!  The sign had been there for some months by the look of it.  I was really cold, and I had a hacking dry cough that I couldn’t stop.  Twenty cigarettes a day for twenty years will do that to you.

After an arctic shower we ate despite not having much appetite, and went to bed.  We rose at one in the morning, and started to get ready for the climb to the summit (Low’s Peak).  We knew it was a further 2.7km up and that we were above the treeline so it was granite and not much else except the ropes to keep us on track.  Off we went with our headlamps on, rugged up against the below zero temps.

It was 2.45am and it was cold and dark and the air was so thin I felt like I was going to suffocate.  My first experience of altitude! A combination of the altitude, steepness, dark and cold, and exhaustion from the previous day made this extremely challenging.  I couldn’t see where I was going except for the circle of light put out by my headlamp, and I had no idea, relatively, where I was.  I had thought of not going on, only once, of seeing the sunrise from just where we were, instead I continued putting one foot in front of the other.  It took everything I had.  It was so hard to breathe and my legs and lungs were screaming.

Finally we made the summit. It was cold with a really strong, bitter wind.  It was dark but the sun was staring to make its mark on the day and giving a little pre-dawn light.

Over three hours after leaving the Resthouse, we sat on the cold rock at the summit, and waited.

The sky turned a magnificent yellow and orange as the sun rose up above the horizon through the clouds.  The darkness lifted and I felt like we’re on top of the world!  The sun rose a little more and provided an awe inspiring view.

We were cold, sore and exhausted, and elated to have made it.  I felt like I could do anything.  The sun came out in all its glory, darkness was gone and I could see where we had climbed up.  I wondered if we’d actually get back down!  We were at 13,500ft or 4095.2m and it was below zero.

The trip down was hard on the joints and we arrived back at the Resthouse two hours later.  From here we continued on for the base where we had started the morning before.  All up today we would climb, or down-climb, for over 11 hours.

More monsoonal rain.  Soaked, sore, tired and elated, we arrived at base. Elated.

One mountain called.  One wild experience called to me.

Now I can hardly hear myself think with all the other mountains and wild experiences calling me every day.  Some days they are loud and relentless, other days it’s just a whisper, a nagging feeling.  But every day I can feel their call.

That calling, well it’s taken me to Nepal to trek to Everest Base Camp, to the summit of Mt Kilimanjaro in Africa (the highest freestanding mountain in the world), across the Kokoda Track (5 times), to the summit of Mt Meru in Africa and numerous other adventures that are now part of me – they exist inside of me.

I don’t know where it will end – but I remember where it started.  And it was here, where it started, that, for the very first time, I really learnt that when I think I can’t go on anymore, I can.

I’m forever grateful to my son who at 13 took on this challenge like a champion, and honoured (or is that humoured) his Mum by coming on this journey with me.  It’s something we will share forever.

What’s whispering to you?  What’s calling to you? What’s your mountain?