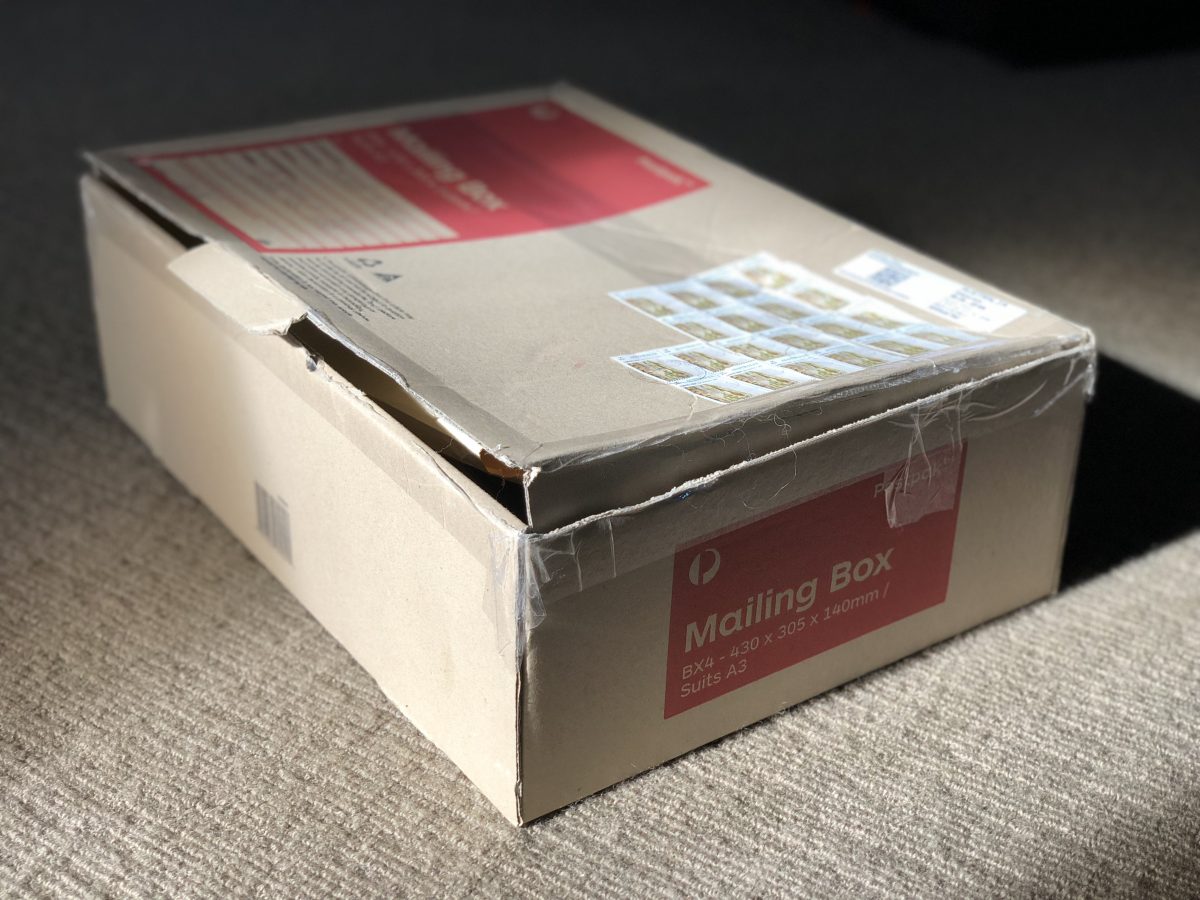 I saw it as soon as I got to the top of the stairs. It was on the kitchen bench and it was hard not to notice. One of those large postage boxes – the biggest delivery we’ve had for a while. I quickly started to think about what I might have ordered on eBay in the past week or so, what (clearly) large item did I, at the time, deem was a necessity in my life? I drew a blank.

Maybe it wasn’t for me. I’m not sure why but I had a sense of fear about me. Me and this parcel. I tentatively approached the parcel to see who it was addressed to.

Me. No sender details either.

Normally letters (sans bills) and parcels in the mail are cause for excitement – with me frantically ripping open the wrapping to get to the goodies inside.

Not this time and I had no idea why. I retrieved the scissors from the kitchen drawer and started to carefully tear away the tape holding the box together. Slowly.

I lifted the lid, still unsure why I was feeling this sense of trepidation….or was it fear. What was it?

Out on to the table spilled a stack of photographs many of which I recognized immediately. Family photos mostly, old school photos, some old black and whites whose subjects I mostly recognized as members of my fathers side of the family. There must be over 100 photos here.

Two old school exercise books. Like the ones we all had in primary school. 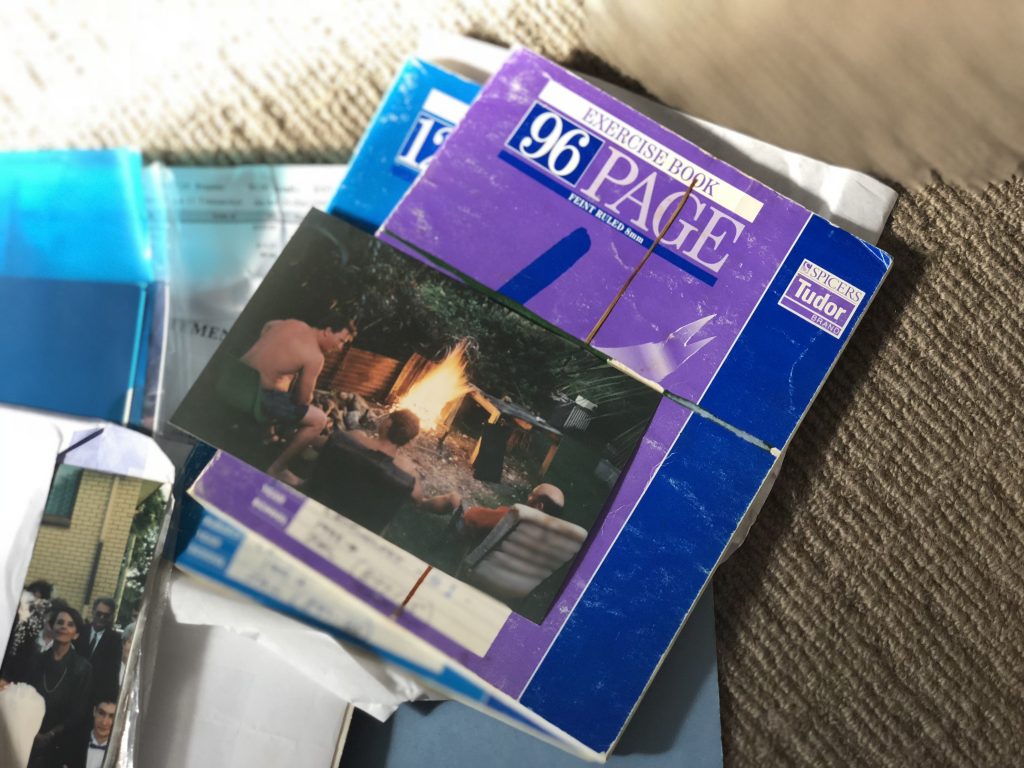 I recognised the handwriting on the front covers immediately. It was my Dad’s.

He’s been gone for over 4 years and now I remember that my step sister had mentioned she was finally going through the last of his and my step-mothers stored items. She said she’d send to me anything she thought I might like to have.

Here it was.  Everything that was left of my Dad was in this box.

I held the note books in my hands. I dared not open them. It felt like to do so would be to breach my Dad’s privacy. They looked to me like they were journals of some sort – though I never did think of him as the journaling type.

Upon closer inspection, I see he’s labelled them on the front.

My heart literally skips a beat.

After losing my Mum when she was just 42, my Dad (who was also 42), wandered around untethered for the next few years. He was lost, his one love taken from him when he was but himself still a young man. He lost all faith in himself to go on, in his ability to feel alive without her. He took to spending most of his days with a bottle of scotch, ignoring his business and his life. He spun out of control over several years, and to cut a long story short, decided on one September day that his life wasn’t worth living any more.
He attempted suicide.

He didn’t succeed thanks to two angels who found him in the midst of it all.

It was my birthday a year later when the judge rang down the gavel, sentencing my father to over a year in prison for white collar crimes he’d committed since befriending alcohol and using gambling as an antidote in the hopes it might somehow numb his pain.

Criminology Parts 1 and 2 it would seem, were my Dad’s journals from this time in prison.

I’d visited him as much as I could when he was in there, and I’d written to him often, but during and after, he never really spoke of that time.

In my hands were his writings about a year of his life where his freedoms were removed in order that he repay to society for the crimes he had committed. Writing that at a glance, seemed raw and straightforward but with his wry sense of humour.

I close up the first book. I feel like I’m prying. Do I want to read this? Did he leave these safely with his other important documents because he wanted them read? Have I got it in me to open this book again?

No. Not right now. I put the books back.

I keep looking through the box. What I now refer to as the box of Dad.

There’s a folder and in it I find a series of hand written letters and cards. Upon closer inspection I see they are all from a one year period. Every single piece of correspondence my Dad received in prison is here in this folder, in date order with a note on each piece reminding him of when he had responded to each. 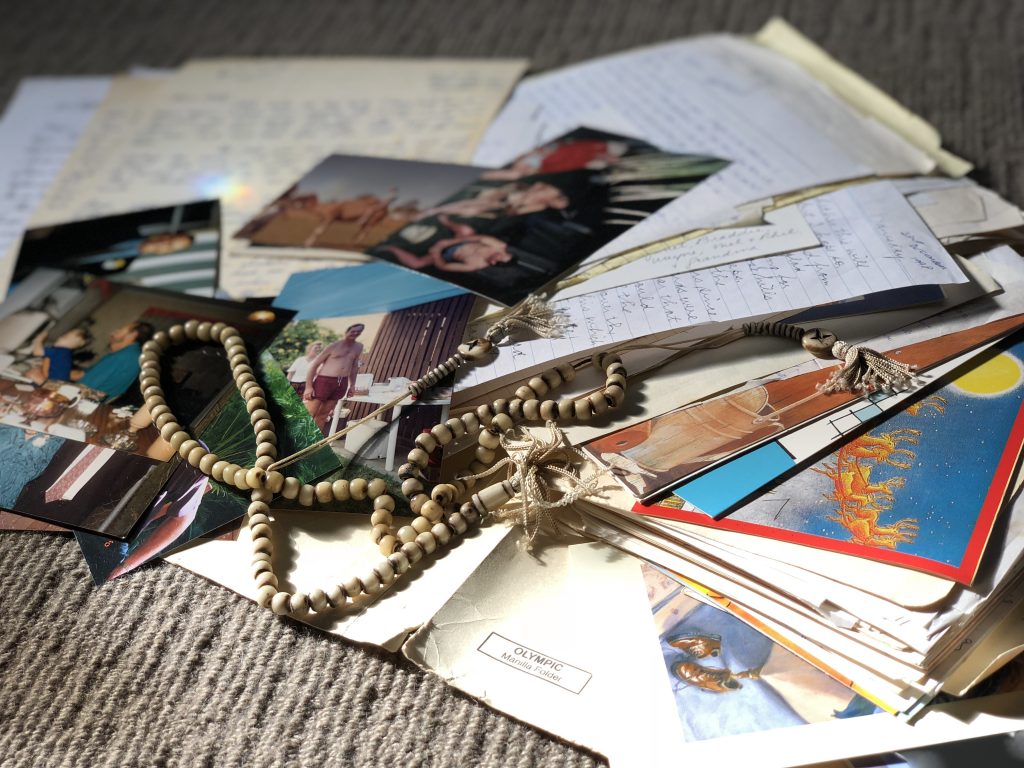 I find letters penned in my own hand addressed to him.  Letters from myself some 20 years ago. Letters from a daughter on the outside, to her father on the inside. While the content of the letters is what you would expect; updates on the world, the kids, the family, the house renovations and the like, the pain this daughter is holding in is leaping from the pages.

With my shaking hands I drop the letters back in the box.

Through tears I fumble in the kitchen drawer for tape and take to the box – sealing it back up, containing the pain and the memories and  the fear and the love. Shoving it all back in that box. Sticky taping it back inside because right now, it needs to stay in there. Right now, I don’t have it in me to open the box because I know that to open the box, I will open up the grief around my Dad, the memories of those times, the wounds that are barely holding themselves together with the haphazard stitches I have used to keep them from splitting open again and again.

I tell myself the box of Dad can wait – it’s waited this long – it can wait a while longer.

I take a deep breath in. Then out.

I pick up the box of Dad and put it in a chest in the lounge room and close the lid.

I pour myself a glass of red wine.

Here’s to you Dad. I miss you. For a moment this evening, you were right next to me as I read your words, in your handwriting. You felt so close I thought if I looked up, I’d see you there, at the kitchen table. So I never did look up because the disappointment of you not being there would have torn apart my heart again. So I taped you all back up with sticky tape.

Until another time. Another day.