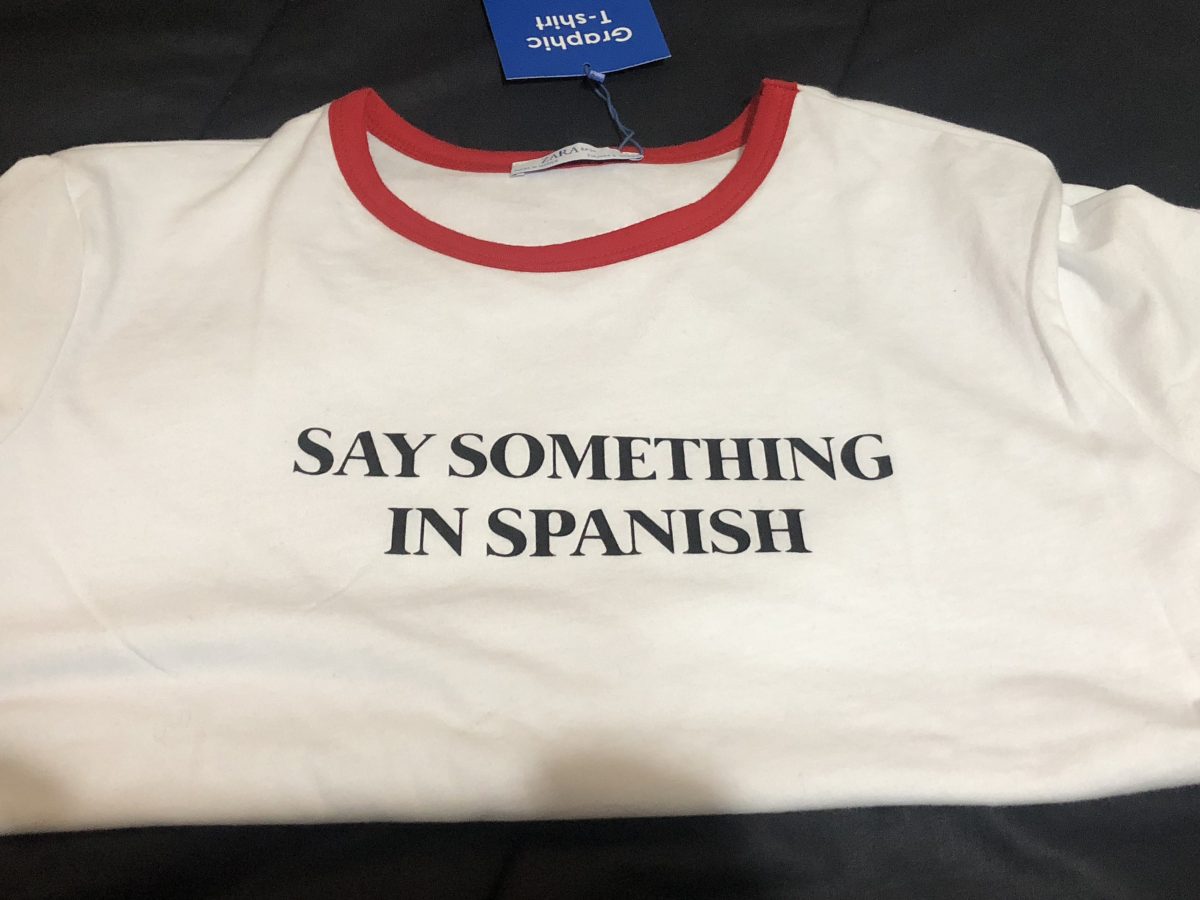 Studying a foreign language in a foreign country was always something I’d dreamt of doing. So having planned a trip to Spain I made sure I had time scheduled to fit in a Spanish language course. It was both surprising and challenging.

With the help of google maps I wander my way across Salamanca in Spain, trying to locate the place I’ll be living for the next week. I’m dragging my small rolling suitcase along the cobblestone streets. It’s not working very well. I’ve chosen to do a week long intensive Spanish language course in this city and I’ve chosen a home stay option. That’s what I’m looking for. My homestay.

I know I’m staying in an apartment owned by Magdalena, a Spanish lady of 72, a widow and a regular homestay for students of the school I’ve chosen.

I find the place. Take a deep breath and press the buzzer.

What am I doing?

Oh man! I have no idea how this week is going to play out.

‘Hola?’ I hear over the speaker.

The door lock audibly clicks and I push the door open and enter the apartment block foyer.

I make my way up the elevator to find Magdalena at the door of the apartment, waiting for me. Hola – she says, followed by a few sentences in Spanish that I don’t understand. She shows me my room, the bathroom, and the rest of the apartment.

She has lunch ready but gestures to me to unpack and settle in first.

I go to my small but functional single room which has a desk, bed and wardrobe and unpack the small amount of luggage I have with me. I head out to the dining room where Magdalena has set the table for lunch – which of course is at around 3pm.

We chat for a while – well she does and I nod and smile and seem to understand a few words. I think she says that breakfast is at 10am or maybe 7am. Or was it 2pm? She tells me there is another student staying and I am relieved thinking that if he’s here to learn Spanish there’s a fair chance he might know some English. Then he arrives and I meet him. His name is Felix (not his real name – his real name is really long) and he is from……ETHIOPIA! He’s fluent in French and not too bad at Spanish (he’s in the advanced class)…but has only a minor grasp of the English language.

Magdalena sat us down for lunch and explained that the course convenors ask that she only speak Spanish with the students….great. That means that effectively there is no common language between the three of us. I start eating the potato salad she’s served and realize there’s tuna in the salad. They put tuna in everything in Spain I’ve noticed. It was too late to tell her I don’t eat seafood, and I especially don’t eat tuna, so I ate it, gagging only twice when my mind went to cat food. Then of course once I’ve eaten it, it’s too late to tell her I don’t eat seafood – plus I need to learn how to say that in Spanish in any case. I will spend the rest of the week hoping for no more tuna.

And that was just my first afternoon – classes haven’t even started yet. If I had any doubts about whether I could push the edges of my comfort zone any further after the last 45 days in this country, they have dissolved.

I have no idea what’s going on here. It will be an interesting week.

So for an entire week I get up early, eat breakfast with Magdalena, listen as she speaks in Spanish to me, hoping each day that I’m at least understanding more words. I meet new friends in class from all over the world and we soon start getting together of an evening sharing meals and wine and talking about the world and life and learning Spanish.

Make no mistake, the classes are really challenging and this stuff is hard. I had done a short course in Spanish before I left Australia, I had been using Duolingo and other apps to help me learn, but even with that, I was seriously in the deep end. Every word spoken by the teachers is in Spanish, the entire text book we are learning from is in Spanish (even the instructions for the exercises). Some days, alright, most days, I feel like I’m going backwards.

Then of course I go home and even though my brain is hurting from the day of intensive lessons, I have to strain and work hard to understand Magdalena and communicate with her. It really is challenging so much so that I often retreat to my small single room, for a siesta or to study. Some days I even force myself not to look at any signage or shop advertising because my brain is so overloaded the last thing I need is to be reading more things in Spanish that I don’t understand.

I’ve lost sight of my comfort zone I am so far outside of it.

There were more than a few trying moments during the week where I made an effort to put my new language skills into practice.

Shopping – I tried to buy myself a face cleanser after 40 days on the Camino de Santiago where I was washing my face with whatever I had, including shampoo. I had left my phone in my apartment so I didn’t have the benefit of google translate. It would seem that I accidentally brought a face mask instead of a cleanser. Learning to go with the flow that’s for sure. Will try for face cleanser again another day.

Dining – Google translate is an excellent tool for use over here. However I decided against the menu item ‘pluma de cerdo ibérico’ today when google told me it was ‘Iberian pig feather’. I was intrigued….but went for the lasagne.

In class – I was doing a lesson where I was asked to talk about my family (in Spanish of course). Who they were, what they did etc. I said (all in Spanish) that I was married and that I’d been married for 28 years. Javier my teacher was looking at me incredulously and saying ‘wow, wow, 28 years’ in Spanish of course. I was saying ‘yes, yes’ feeling chuffed that he was so happy I’d been married for 28 years. I went on to tell him about the rest of the family in Spanish. At the end he asked me something that I didn’t quite understand. Turns out he wanted me to tell him a bit more about how I managed to have a husband AND a boyfriend who was 28! Ahhhh. I need much more than one week at this gig! Though I didn’t feel so bad when another student said, when asked what she’d done last night “I went to dinner with chickens and we ate my father”.

Out and about – well I made this mistake only once but it was a big mistake.   You see I wanted a beer and so I headed for the nearest Cerveceria (place that sells cerveza/beer) and I sat down at the first one I found. I ordered my beer only to be told I was in a Carcineria not a Cervezeria. The former selling meat and not beer (cerveza). I moved on a bit flustered and sat down at what I was sure was a cervezeria. Until I ordered a beer and found I was instead in a confiteria which sells confectionery!  I ate some pastries and sweets before moving on and eventually finding a beer.  Trick for new players.  Always be careful with your ‘C’ words.

The end of the week

The week that I, at times, thought would never end, finally ends. I’ve completed a week of intensive Spanish language lessons covering about 6 hours each day. The classes were challenging and most of my teachers were amazing! I brought a special shirt to wear for my last day. It got a few laughs from my teacher and class mates.

My homestay host Magdalena gets home later than me most nights (and I’m not getting home until midnight most nights) and by the end of the week we communicate via a mixture of gestures, Spanish and google translate.

I got in to the routine of getting up early, going to class, having a late lunch and then a siesta before studying some. Then of course it was off to the Plaza to meet up with new friends and eat and drink and generally enjoy the city and company.

I was both relieved and a little sad to be leaving. I loved Salamanca. More than any other city I walked through over the past 2 months while on the Camino de Santiago.

I made some wonderful friends in class, who were all in Salamanca for between 3 and 12 weeks for their Spanish studies. I was sad to be leaving them after only one week. Once again though, I realize that I only get to experience the tinge of sadness to be leaving them, because I had the pleasure of meeting and spending time with them in the first place. I look forward to seeing them in Holland, Switzerland and New Zealand sometime in the future.

Is it for you?

If you’ve ever thought about learning a foreign language in a foreign country, I can only say that it is definitely an experience and one that will challenge, and in all likelihood, delight you, if you can keep your focus on the moment in front of you. It might also be overwhelming at times, you’ll probably swear under your breath in class (or on the odd occasion, out loud) and you will likely meet new lifelong friends from all over the world. I can only guarantee one thing though – and that is that you will, most definitely, stretch that comfort zone of yours. You might even lose sight of it for a while you’ll be so far out of it, but you will find it again. Because you will grow to meet it and it will forever remain stretched because of your courage to allow yourself to lose sight of it for a time.

So for now, I’ll hang up my Spanish text book and head off for a month of travel around Spain and Portugal where maybe, just maybe, I can use some of the language skills I have learnt this week.

I hope I can do better than that one time on the Camino in a small village bar when I thought I had ordered 3 beers, only to realize, after many beers were placed in front of me, that I’d ordered 32 beers.

I’ve made worse mistakes in my life….

One thought on “You had me at Hola! Learning a foreign language in a foreign country”

« Meditation – Learning How before learning Why
How to take 10,000 volts and enjoy it! Tough Mudder style. »