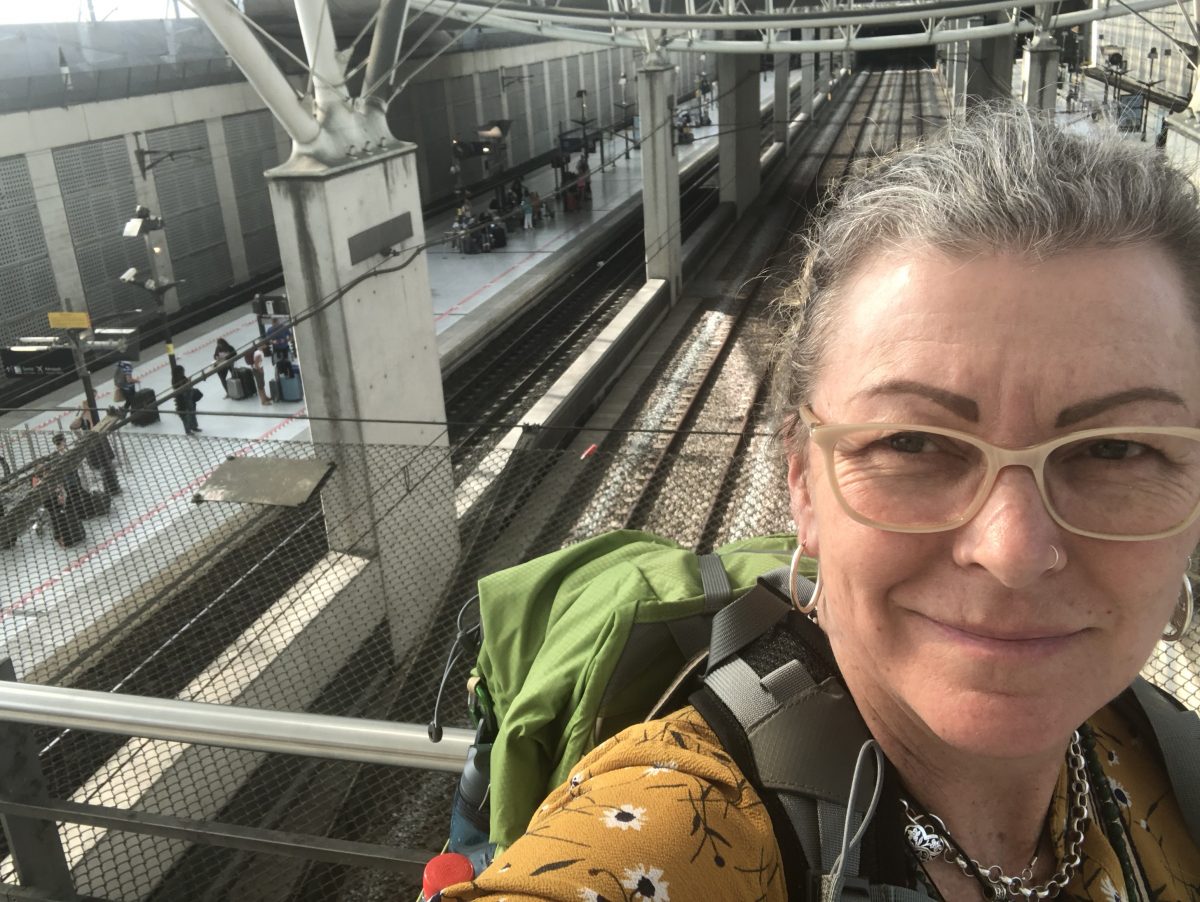 I made a friend on the bus (that was meant to be a train) and his name was (and still is) Jean-Marie and he was born in Mauritius and lives in Canada.  He’s my age and he’s on his gap year!  He and I headed to a bar for a kebab (him) and a red wine (me) while we waited in Bayonne for the train that looked like a bus. I went to the bar to order my wine.  I was tired, and hadn’t learnt any French.  Now I was regretting that decision.  It took the bartender, and four others trying to understand what I was saying (red wine, vino tinto)….until I remembered my new friend Jean-Marie’s first language was French.  Red wine = Vin Rouge.  Finally, with wine in hand, Jean-Marie and I learnt about each other and waited for the train (bus) to my home for three nights – Saint Jean Pied de Port, near the border with Spain.

I met another friend on an online worldwide Camino forum for women, and she happened to live where I live – small world.  She was arriving on the same night as me and so we met up for dinner in Saint Jean Pied de Port (at 9pm – I’ll have to get used to that).  It was nice to see a familiar face – or at least that’s how it felt even though I hadn’t laid eyes on her in person before.  We shared a vin rouge (my third French word after Bonjour and Merci) and chatted to some other pilgrims over dinner.  She was headed off the next morning.

Let me share more about this online forum because it’s important – it’s on Facebook (I know, not for everyone but it serves a purpose).  It’s called Camigas – A buddy system for women on the Camino, and is a combination of the words Camino and Amiga (friend) and was established in honor and memory of a woman by the name of Denise Pikka Theim.  Denise, from the United States, was walking the Camino solo (as I am), in 2015, fulfilling her dream of a lifetime.  Like I am.

Along the Camino pilgrims are guided by yellow arrows, that are painted and plastered everywhere and it is commonly touted that it’s hard to get lost because they help you find the way.  In August 2015, while walking the Camino, Denise was murdered.  She was bashed to death with a stick and both of her hands were cut off.   Spanish man, Miguel Angel Munoz deliberately altered the yellow arrows that mark the pilgrimage route to lure people towards his house which was located close to the route.  After a long investigation and pressure from the US Government, Munoz was eventually charged for Denise’s murder after admitting the crime and leading police to where he had buried her body.  Denise was 41 years old.  May she rest in peace.

The idea of the Camiga’s forum is for women pilgrims to share information, provide support for each other and in some cases, highlight areas and issues along the route that may pose some danger for (in particular) women.  I thank those who created and maintain this site. It is understood that at least one other pilgrim, who was from China, also followed Munoz’s arrow and was hit with a stick by a man fitting his description.  She didn’t report the incident and of course, there was no Camigas forum to post it to to warn others.  Since I have been a member of the Camigas I have seen women post warnings about certain areas where men have been seen masturbating when single women pilgrims walk by, where men have groped women pilgrims and grabbed their breasts as they walk by.  I have seen some women, with the support of the others on the forum, take action, take photos and report the incidents, and in one case I know of, leading to an arrest.  These incidents are overall, rare, but they are there.

It is a shame that as women we need to consider a whole range of extra issues and safety concerns when we walk alone, however, the reality is, we do.

I will listen to my intuition, that feeling that tells me without any doubt whether I’m on the right track.  I will be brave, even when I am full of fear.  I will walk on, even when I can’t walk another step. I will walk to embrace the journey and all it brings, and I will walk with awareness and strength.

So for now, I’m off to fulfil a life long dream.  I’m a pilgrim with nothing to do but walk. Oh and drink some vin rouge or vino tinto with new friends from all over the world.